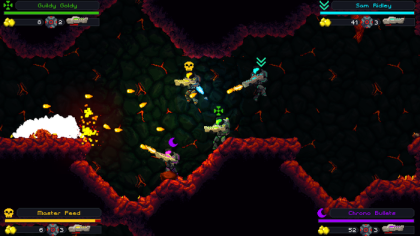 Intel is being sent down from orbit: Here’s what we’ve been up to in July!

This month’s theme is one of feedback both from bugs and about bugs! Strap in and see the hives start to react to the players dynamically and Friday broadcasts of the team playtesting recent builds.

The new Hive Threat system is something our programmer Andrew has been working into the most recent build. Until now, all the gameplay has been at a predetermined pace. Only so many bugs would spawn and all levels of the hives were similar in difficulty.

In the new system, aliens in the hive react to the actions of the players. For instance, destroying eggs and bug spawners will increase alien presence as they try to counter the Jumper threat. If Jumpers die, the aliens perceive that as a decrease in threat, and so their presence decreases.

The Hive Threat system is a big step toward being able to balance the game for hives of different depths and more difficult hives as the campaign progresses. Not only will hives get harder as you go deeper in them, but their environment will also change!