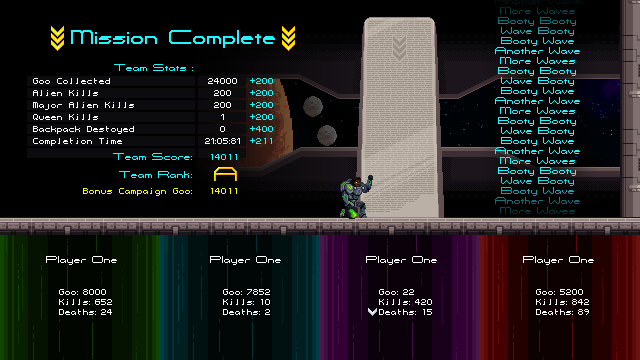 ‘Tis the season to lock yourself indoors and sit in front of a computer screen… and we’ve certainly been getting plenty of screen-time working on Hive Jump!

We’ve been hard at work developing a lot of front-end elements of the game, taking it from feeling like a development sandbox to a real shippable game. In previous updates, we’ve shared a lot of content directly related to gameplay, but as we get closer and closer to an alpha that we can share with you all we have to start making menus galore!

In this month’s update:

So grab a cup of hot chocolate and enjoy the update!

Loadout Screen: Get ready to JUMP!

In last month’s update you saw some work-in-progress gifs of the Loadout Screen, but here it is in its fully implemented and animated glory!

In addition to getting the front-end interface looking and feeling good, we’ve also had to do a considerable amount on the back-end with user profiles. Players will each have a profile that tracks their stats, unlocked equipment, key bindings, and character customization. You can create or select a profile easily, or sign in as a guest if you don’t want you progress tracked.

We love to playtest Hive Jump with fans in the local area and at conferences like PAX and Indiecade as often as we can manage. We always get great feedback from players, and we work hard to incorporate as much as we can. We’ve made several improvements to the In-Game Hud in order to better communicate aspects of the game to players.

We’ve tweaked the positioning of some HUD elements to make room for a brand new Utility Cooldown bar. This will show you how long until you can use certain utility items (currently just Smart Turret and Rejuvenation Field).

Let’s face it, jumpers are somewhat expendable. So, wouldn’t it be nice if you knew how long until reinforcements arrive when they do die? Well thanks to this new HUD element, you can now count down the seconds until you’re back in the fight!

Keeping the Transponder Backpack safe is of utmost importance and it can easily get lost in the chaos of battling swarms of aliens, but NO LONGER! Now the backpack is outlined while down and vulnerable to attack.

We plan to finish building out the front-end of the game over the next month, getting us significantly closer to an alpha that we can share with early-access backers. Here are somework-in-progress concepts for various menus throughout the game!

Note: These are all work-in-progress and subject to change and revisions!

Our very own studio head Matt Raithel was interviewed by Shigeru News about Hive Jump just recently! If you’re still itching for more Hive Jump news and updates, you should give the interview a read here.