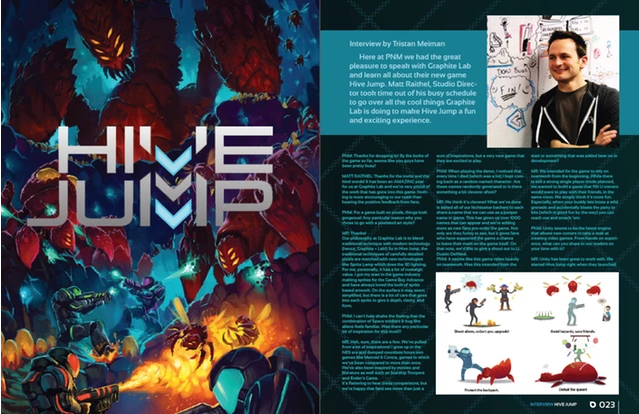 We’re super pumped to bring you this update because it shares the first look at one of our biggest and most important systems. Online multi-player. We’ve also been progressing with additional front-end elements of the game, creating and sharing backer NPCs as well as doing our best to spread the word about the game.

In this month’s update:

One of the biggest systems we’ve planned for Hive Jump is the Online Multiplayer system. While the game has been designed with multiplayer in mind from the start, there were months of development where we had to get in depth with the gameplay and the online play fell behind. We’re now happy to report that we’re getting that system properly synced.

Some highlights so far:

Even beyond bug-fixing and optimization, there is still a fair amount of work to do (such as the steam matchmaking), but we’re so excited to be getting to this stage where we can play Hive Jump online. We can’t wait to play this game with all of you!

All of our AWESOME NPC DESIGNER TIER backers and above are getting their likeness added to the game! We’ve enjoyed talking with all of you to collect your photos, learn about your interests, and then turn that into an awesome NPC which will be discovered in special parts of the Hive.

Want to say a special thanks to Justin Sharp, Tristan Meiman who flattered us with a two page indie spotlight in the Dec/Jan issue of Pure Nintendo Magazine! Then, we need to say a HUGE THANKS for the WHOPPING 6-page spread which covered Hive Jump! THANK YOU!

CRASHLANDS! Woot! How awesome was that trailer?

We can’t say enough good things about our buddies at Butterscotch Shenanigans. These guys (fellow St. Louis developers) have gone through serious hell to bring their game to market and guess what? It launches tomorrow on Steam, iOS, and Android!

Pick up a copy and give them that day 1 bump!