The different objects in the app really bring life to the experience and were an important part in making the connection between letters kids are writing and the objects they represent. Our team had a lot of fun working with many of the existing sculpts that Hasbro provided, but also had the challenge of creating some completely new objects such as the Gorilla, King, and X-Ray. So, we got our hands dirty and generated a bunch of different types of each object passing them through a review process at Hasbro to get them approved for use in the app. 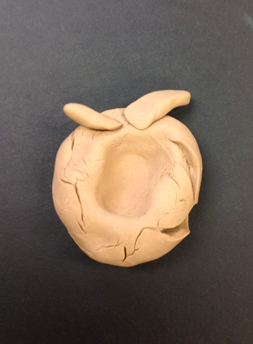 We also saw a very important need to squish these objects within the app somehow – after all, Play-Doh is about squishable fun! We drafted demos of several different approaches to achieve a squishy effect for the doh to test what worked best. Ultimately, we settled on a method that required us to create multiple squished states for each of the 26 objects using real Play-Doh. This increased the content needs considerably as we needed to create the objects using real Play-Doh, then partially squish them, take a picture with a camera, then squish the object a little  further, repeating the process until 3 squished states were captured.  We set up a custom photo studio in our office and took individual snapshots of objects in each state in order to assemble the final squish sequences.

Since each object had multiple pieces that could be individually colored by the user, we had to find a way to get the best and most consistent tinting possible in order to remain true to the Play-Doh branded color guide. Of course, if you apply a red tint to a blue shape, you will get a different hue than if applying the same red tint to a green shape – so we had convert all objects to gray-scale first before the game engine added the dynamic color tinting. This way, the tinting process was consistent with the brand guide no matter what color the user picked.  Therefore, we had to find a way to capture the sculpt using a camera, while keeping as much color contrast as possible before converting to gray-scale in Photoshop. After sever tests, we found that creating each object completely in Orange Play-Doh and then converting to gray-scale gave the best contrast.

Previous Post: Play-Doh Create ABCs – The Engine Under the Hood

Check back next week when we share more about launching the app!