It’s been a busy few weeks since the last update, and we have more good news to share with you! Here’s what you have to look forward to in this update:

Incoming transmission from the H.S.A…

The footage you’re about to see is highly classified. A reconnaissance jump team has identified a new elite Ordovician lifeform. The troopers are calling it “The Harvester.”

The Harvester appears to be an elite member of the Ordovician worker class, with some truly grotesque defensive mechanisms.

The Harvester is capable of eating any form of matter with it’s ravenous maw, and anything incompatible with it’s digestion is vomited back up.

It’s tail appears to be both an effective weapon and a critical weakpoint. Jumpers would do well to track it’s movement carefully and focus fire when possible.

We’ll be adding more aliens to the game in the coming months, so here’s just a little sneak peek of some creepy crawlies in store… (concepts by @raitheoshow)

Or check out a time lapse of the painting process for an upcoming alien type. When going through the concept design process,  we always try to develop aliens that look really tough, but are also gooey and gross at the same time.

Relics located within the hive…

We’ve been working to integrate lots of new relics in the different rooms of the hive. These relics will offer the player added bonuses when collected such as increased defense or faster move speed to name a few.

Crusher Claw – A claw taken from a Crusher beast. The alien claw comes to a point in an extremely dense manus, above which towers a massive slab of chitin that acts as both a driver and a shield. The impact force of a Crusher’s claws can obliterate anything it strikes and tremors from the impact will send any grounded forces flying. By studying the claws of these formidable beasts, the H.S.A. is developing more resilient alloys for Jumper armor.

Scorcher Wing – The severed wing of an Ordovician Scorcher. The wing has thick chitinous frame with extremely thin but strong translucent chitin plating forming the majority of the wingspan. Ordovician chitin is tempered by the heat of volcanic areas in the hive. Scorchers dive into molten magma and re-emerge, allowing the heating and cooling process to strengthen their chitin. The H.S.A. is studying the molecular composition of this marvelous chitin in order to provide additional heat protection to Jumper armor.

We’ve been invited to show Hive Jump at PAX EAST! The amazing team at Kickstarter is including Hive Jump as part of their promotion along with some other great titles. If you are in the area or attending the show, make a plan to stop by and see our latest progress and meet Lead Designer Matt Donatelli (@mattdonatelli), too!

PAX East is held at the Boston Convention Center at 415 Summer St, Boston MA 02210. Hive Jump will be located in Room 103, located along the Northwest Corridor above Exhibition Hall A.

Hive Jump will be shown during the times posted below.

We had a great time showing a demo of Hive Jump at the Wizard World Comic Con in St. Louis the first week of April. With over 17,000 in attendance, we we’re able to spread news of the alien infestation far and wide! Even the Flash and a Stormtrooper joined the Corps along side our lead QA tester David (@vaidd). 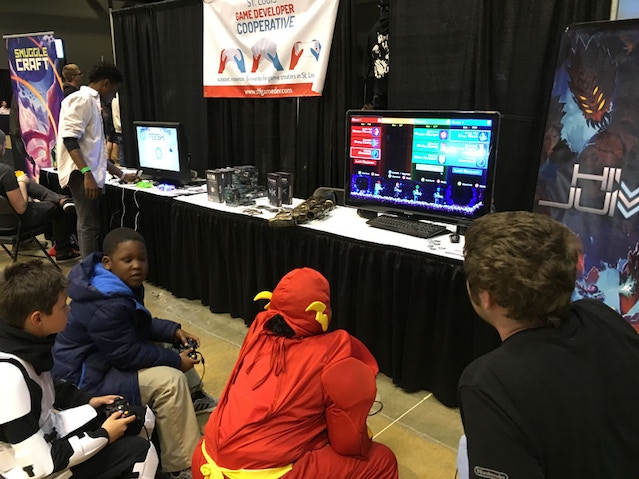